Over the weekend, Howard Goldberg reported a startling change in his Win10 Search bar:

I’ve compared the search and Cortana settings on both systems for any differences, and I can find none. The search bar is still finding my local files, etc., the behavior is the same (as far as I can tell), but the text has changed and it’s bugging me.

That sparked a discussion that culminated in a revelation that’s news to me. Apparently Microsoft updates the Search bar without asking for permission. I saw the behavior on my main machine this morning. It’s running Win10 version 1903. After rebooting, the build number for the Search box increased from 2020.02.01.6237928 to 2020.02.02.6237943 (screenshot). 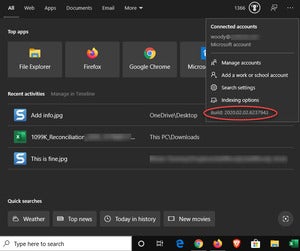 You can see the build number on your own Win10 machine by clicking once inside the Search box, then clicking the three dots in the upper right corner.

I have no idea why or how the build changed. There was no “Check for Updates,” no notification that updates had been installed, and the change doesn’t appear in any of the Update history entries (Start > Settings > Update & Security, on the right click View update history).

As you can see from the screenshot, my main machine still says “Type here to search.”

So we’re left with two unsolved mysteries. First, the Search text changes on some 1909 machines to “Start a web search” for no apparent reason. Second, the build number for the Win10 1903 and 1909 Search box changes without any interaction with the machine’s owner.

We’ve already ruled out the announced change in Office 365 ProPlus, which hijacks the Chrome browser’s search engine — none of our test machines use Office 365 ProPlus. It doesn’t look like this month’s “optional, non-security” update for Win10 version 1903 or 1909, KB 4532695, has triggered the change — Goldberg is running it, I’m not. While it’s clear that both texts appear on different machines with version 1909, we have yet to see a 1903 machine with “Start a web search.”

Microsoft’s doing all sorts of funny things these days with Windows Search, some of it documented, some of it clearly not. The recent attempt to fix the long-standing bug in Win10 version 1909 File Explorer search, in last month’s 1909 Cumulative Update, made things marginally better — but it’s still buggy. (In spite of what you may have read, there are no Warnings Issued for Millions of Microsoft Windows 10 Users.)

The bugs appear to stem from Microsoft’s change in File Explorer Search from a Win32 program to a WinRT/UWP program. At least, it’s part of the problem. Could a change in File Explorer Search be giving the Search box multiple personalities? Or is this just an A/B test (as BP has suggested), where Microsoft neglects to tell you if you’re an “A” or a “B”? And why would Microsoft think it’s OK to change something as fundamental as Search without telling anybody? Surely there must be some admins out there who are concerned about a shape-shifting Search box.

Operating in our usual mode of crowdsourcing documentation where Microsoft has provided none, can you help? Do you have a Win10 version 1903 machine (type winver in the Search box and press Enter) that shows “Start a web search”? What’s your Search box version number? Is it changing?

Fill us in on AskWoody.